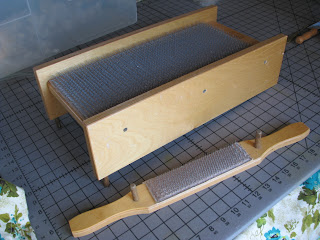 Recently the talk of the Fiber Prep group on Ravelry is about "blending boards". It's like a drum carder, but without the drum. A flat surface covered in carding cloth. During the same week this was impressing many on Ravelry, hubby and I were in a thrift store where he spotted this! Naturally it had to come with me. (This model is not the same as what the current buzz is about.) 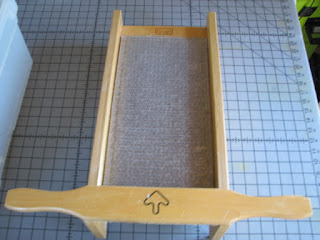 So it is a heavy wooden box construction, with a separate handle that also has carding cloth on it. The manufacturer is Louet, a good name in spinning circles. A little vacuuming to clean out the remains from the previous owner and I was ready to roll. 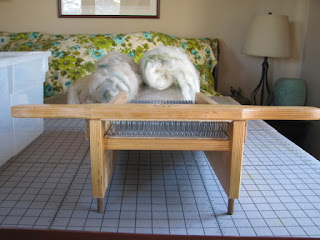 Here is the end on view, so you can see how the two sets of tines are proximal to one another. The batts in the back ground came off of an Ashford drum carder. 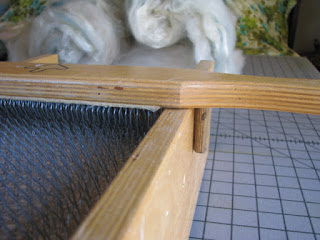 And here is a view of the pegs on the handle which help to guide you in a straight path and you sweep away from yourself. 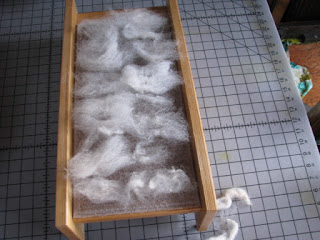 In this image you can just see two wool locks to the right of the device. My starting point is a mystery wool that was a gift from a lady I bought a wheel from. It is quite crimpy and has a staple length of about four inches. I have flicked open a few locks and placed them on the carding board. 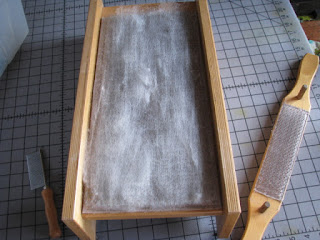 Here is the result after two or three passes with the handle. I was lifting up the handle slightly as I came to the end of the pass. I saw that hint somewhere on an older Ravelry post where the person was familiar with a similar device. Some of the Louet models have two "wheels" on either side of the box and a roller covered in carding cloth, instead of this handle design. 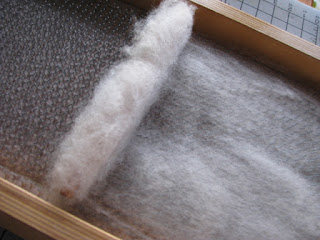 I had this dowel within easy reach of the board and so thought I could roll the mini-batt off with its assistance. It came up so easily and neatly! No residual fibre remained in the cloth! 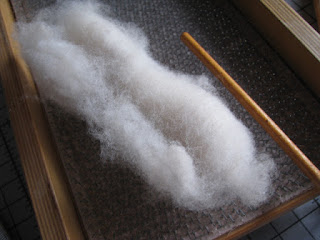 And with the dowel removed, there was a little roll just begging to be spun at the wheel! While I do own a drum carder, it is a joint custody situation, and so when it's my friend's turn to have the drum carder can play with this new toy! Three cheers for thrift stores and reusing old things.

Popular posts from this blog 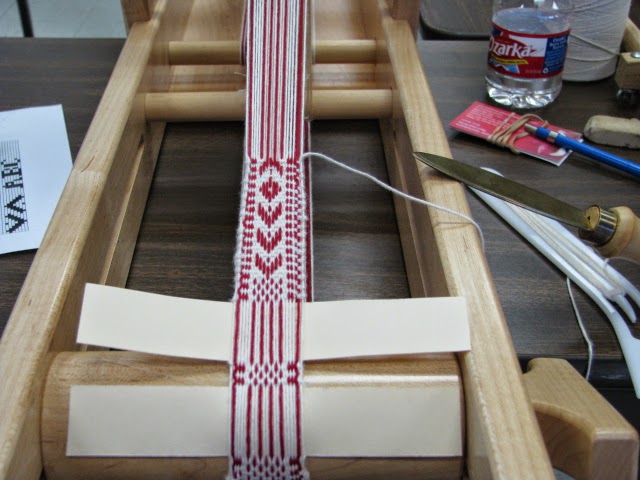 Last week I was delighted to be able to participate in a Lithuanian Band Weaving class in the Big City. In this first photo is the very start of the project, with spacer chunks of paper and the still wide plain weave portion visible. After a little bit of the pick up pattern was woven the right edge tidied up and the band is narrower. Maybe I will show you how it looks in another post.

Here was an inkle loom that won the prize for the smallest and most portable.

And this gal preferred to work hers resting on the ground.
now this inkle, A Fuchs brand, had an interesting tensioning mechanism on it.
Some of the participants working away, We see inkle looms of various types. I had also brought a simple frame loom to show as well with a project on it.
Our instructor, a Lithuanian lady at left. Myself in the middle and a lovely weaver on the right. We are intent on learning everything we can! I wish I had these learning opportunities closer to home. It was a fun day and I'm very g…
Read more 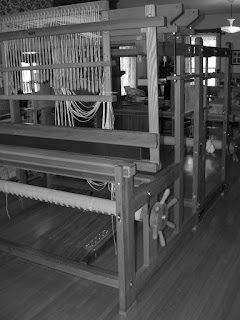 Get a look at what followed me home recently! I have gleefully adopted "Courage"  - my new addition to the family. WELCOME.


The original owner of this loom was William Dyer, a famous weaver who lived in California and Washington State. He made very fine damasks with this loom.

A very large loom manufactured by Oxaback in Sweden. The model is called "Ulla Cyrus". It is a vertical countermarch with 16 shafts and 18 treadles. Plus it has the additional, optional unit draw and pattern shaft draw. Two different drawloom attachments. The weaving width is 63 inches.


I picked up this beauty in the north part of Texas, and the loom was already disassembled. This photo shows just a fraction of the gear. It was great fun to meet the current owner.


Here we have returned home and both the box of the truck and the 5 x 12  landscape trailer are entirely filled with loom pieces. Completely. It is a lot of gear.


And this is a glimpse at a small portion of the loom pieces. The lo…
Read more 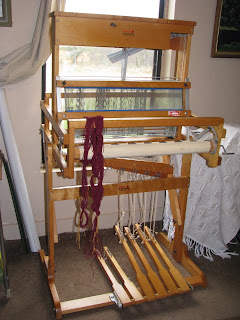 Here's the newest addition to my Painted Floor Studio. This is a Medico table loom, manufactured by Leclerc, a Canadian company. Research suggests this loom was manufactured for WWII veterans to use. As such it utilizes hand levers for changing the shed. But as you can clearly see in this picture, I have the floor stand which includes six treadles, essentially making it a floor loom.
The maximum weaving width is 22 inches. When I bought this loom last week it came with the blue and white warp on there already. I decided to just play with it, getting the hang of the levers and treadles. I figured out how the previous owner had the tie-ups done, and then "went with it."

Altogether I wound up with a piece of fabric about ten feet long. I will either cut it into bits and sew small bags out of it, or maybe use most of it for a scarf.

In this photo you can see the four hand levers (silver) in the top right corner of the loom. In the top centre area of the loom is a lock r…
Read more